NetworkNewsWire Editorial Coverage: Investors are flocking to gold, silver and other precious metals in record numbers. One firm, BullionVault, reports that in the past six months demand to invest in gold, silver and platinum has reached almost half a billion dollars. “Net of client selling, investing in physical bullion on our peer-to-peer platform — first opened in 2005 — has now topped $442 million since the pandemic reached Europe and North America in March,” the company said. Mining companies around the world are benefitting from this rising investment tide, as they work to strengthen their positions, increase their holdings and ultimately provide more raw material for investors looking for more stable options. One of those companies, GoldHaven Resources Corp. (CSE: GOH) (OTCQB: ATUMF) (GOH Profile), has secured options on some of the most promising properties in the highly productive Maricunga Gold Belt of Chile, including one yielding rock chip sample assays of 764 grams per tonne gold and 719 grams per tonne silver. GoldHaven plans to commence a drilling program in January 2021. Yamana Gold Inc. (NYSE: AUY) is expanding its footprint with its recent acquisition of Monarch properties in the Abitibi Region in Quebec, Canada. Other companies are releasing impressive reports regarding their current operations. Fosterville South Exploration Ltd (OTC: FSXLF) has provided high-grade assays of up to 152 grams per tonne gold in rock chip samples at the Star of the Glen target on the Golden Mountain project. Kinross Gold Corporation (NYSE: KGC) (TSX: K) announced the results of a prefeasibility study on its Lobo-Marte project, which indicates the potential of a cornerstone asset with attractive all-in sustaining costs to enhance the company’s long-term production profile. Gold Fields Limited American Depositary Shares (NYSE: GFI) is considering a number of automation projects at its South Deep gold mine in Gauteng, southwest of Johannesburg. 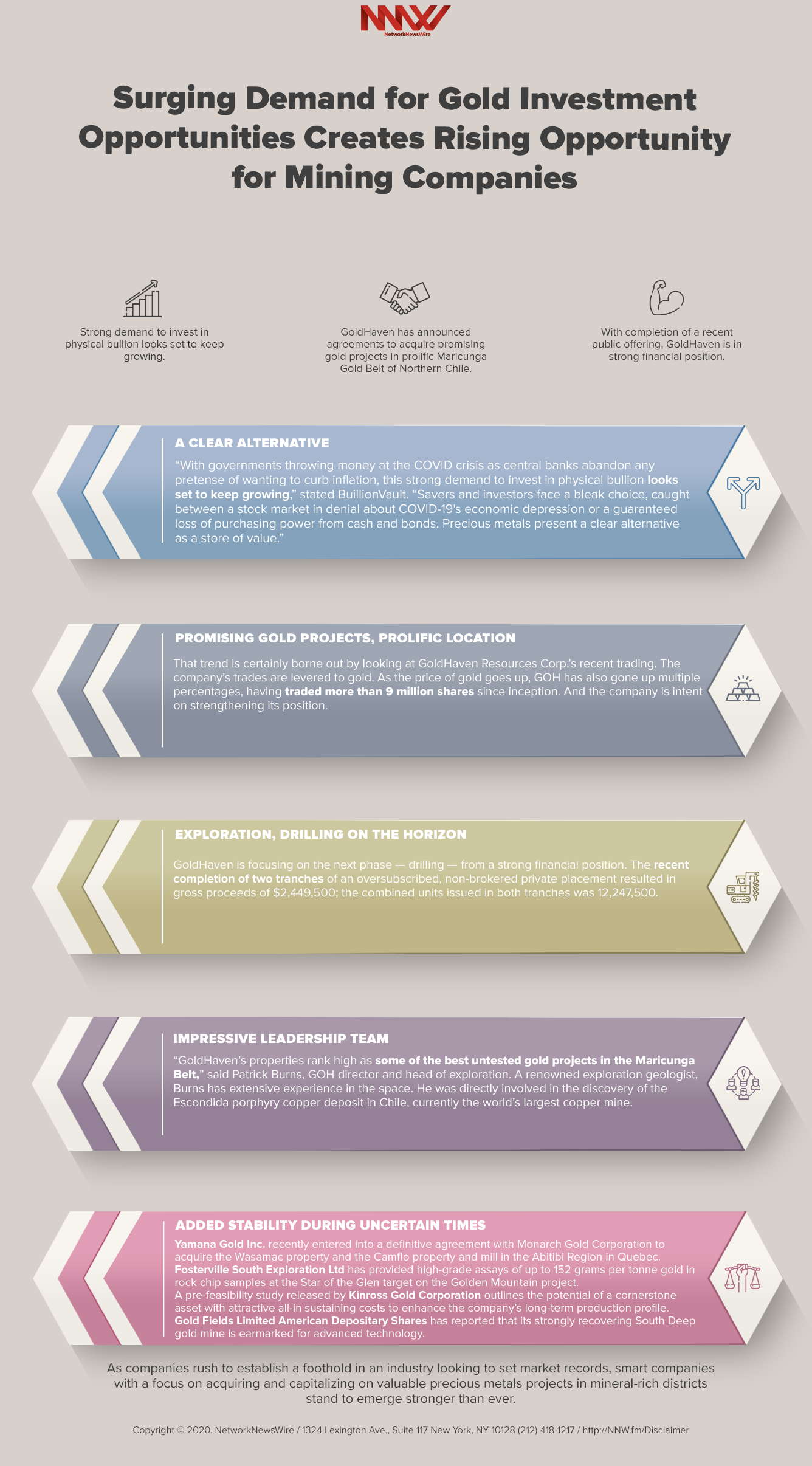 “With governments throwing money at the COVID crisis as central banks abandon any pretense of wanting to curb inflation, this strong demand to invest in physical bullion looks set to keep growing,” stated BullionVault. “Savers and investors face a bleak choice, caught between a stock market in denial about COVID-19’s economic depression or a guaranteed loss of purchasing power from cash and bonds. Precious metals present a clear alternative as a store of value.”

It’s that clear alternative that has led to record prices for both gold and silver. Gold reached above $2,000 per ounce earlier this year while silver has risen nearly one-third since July, its fastest upward trend since 1987. “The idea that gold preserves wealth is even more important in an economic environment where investors are faced with a declining U.S. dollar and rising inflation,” states Investopedia, which notes that historically, gold has served as a hedge during fragile economies.

“Gold in particular tends to do well when other investments fall, but it does best when people lose confidence in central banks, and today’s central bank chiefs have lost faith in themselves,” the BullionVault article reported. “With US Fed chief Jerome Powell announcing the death of ‘inflation targeting’ at central banking’s annual Jackson Hole summit last month, the number of people starting or adding to their gold investment holdings across August rose 28% from July, reaching the 3rd largest figure in our 15 years of business.”

That trend is certainly borne out by looking at GoldHaven Resources Corp.’s (CSE: GOH) (OTCQB: ATUMF) recent trading. The company’s trades are levered to gold. As the price of gold goes up, GOH has also gone up multiple percentages, having traded more than 9 million shares since inception. And the company is intent on strengthening its position.

Within the past six months, GoldHaven has announced agreements to acquire promising gold projects in the prolific Maricunga Gold Belt of Northern Chile, an area that boasts discoveries within the last decade of more than 100 million ounces of gold and in excess of 450 million ounces of silver. GOH’s extensive land position, in the northern portion of the Maricunga Belt, totals approximately 100 square miles, making it one of the largest gold exploration players in the Maricunga.

Several of GOH’s projects are strategically located in close proximity to some of the area’s stellar discoveries, including Gold Field’s Salares Norte mine, with an excess of 5 million ounces (Moz.) Au, and La Coipa, a Kinross mine producing more than 7.6 Moz Au. Work completed to date on GoldHaven’s targeted properties suggest these key properties may be an analogue to these deposits, particularly to Salares Norte.

To date GoldHaven has classified four of its properties as high priority: the Rio Loa, Coya, Alicia and Roma projects. Both the Rio Loa and Alicia projects are located within 20 miles of Salares Norte, and Coya is approximately 10 miles northeast of La Coipa. These high-priority targets were defined following modern-day field evaluations including mapping, geochemical sampling and satellite imagery, as well as their location relative to existing deposits and discoveries. Three of GOH’s projects are drill ready, and the company anticipates phasing in a drilling program in the first quarter of 2021.

Exploration, Drilling on the Horizon

GoldHaven is focusing on the next phase — drilling — from a strong financial position. The recent completion of two tranches of an oversubscribed, non-brokered private placement resulted in gross proceeds of $2,449,500; the combined units issued in both tranches was 12,247,500.

The Company plans to use the net proceeds of the offering to commence exploration and drilling programs on its Maricunga Gold Belt projects and general working capital with drilling scheduled to commence early next year.

“GoldHaven’s properties rank high as some of the best untested gold projects in the Maricunga Belt,” said Patrick Burns, GOH director and head of exploration. A renowned exploration geologist, Burns has extensive experience in the space. He was directly involved in the discovery of the Escondida porphyry copper deposit in Chile, currently the world’s largest copper mine, and the San Cristobal gold mine, also located in Chile. Burns has been involved in successful publicly traded exploration companies in Chile for almost four decades.

Burns is only one of several impressive executives on the GOH leadership team. Dan Schieber, GoldHaven director and CEO, established his career in metals and mining finance as an analyst for the Stabilitas Group of Funds. He also co-founded Euroscandic International Group where he raised upwards of $350 million in project financing for specific development projects in the mining sector. Following that success, he turned to Canadian-based farmland investments, becoming chief investment officer at Dynamis Capital Corp., which focuses on long-term, recession-proof investments with an emphasis on gold and silver.

GoldHaven is the third successful public company that president and director David Smith has co-founded. Both the previous two companies traded on the TSX and had an environmental focus. Both firms were sold yielding significant profits to shareholders.

GoldHaven director Gordon Ellis has more than 50 years of expertise in the mining industry as a professional engineer, and he currently serves as director of a multibillion-dollar ETF. Scott Dunbar, also a GoldHaven director, is a professor and the department head of mining engineering at the University of British Columbia. Dunbar has been involved in mining exploration, geotechnical engineering and mine design projects around the world.

GoldHaven Resources isn’t the only company jostling for position in the hot mining space. As investors look to the sector for added stability during uncertain times, other savvy companies are making strategic moves to leverage their expertise.

Yamana Gold Inc. (NYSE: AUY) recently entered into a definitive agreement with Monarch Gold Corporation to acquire the Wasamac property and the Camflo property and mill in the Abitibi Region in Quebec. The Wasamac gold underground project is Monarch’s principal asset and consists of five well-developed ore shoots within a single, continuous shear zone with a consistent grade distribution and wide mining widths, making it amenable to simple, productive and cost-efficient, underground bulk-mining methods. Mineral resources and proven and probable mineral reserves are supported by a previous feasibility study, and Yamana completed independent geological modelling, mineral resources and mineral reserves validations as part of its due diligence reviews to ensure greater levels of accuracy.

Gold Fields Limited American Depositary Shares (NYSE: GFI) has reported that its strongly recovering South Deep gold mine is earmarked for advanced technology. After reporting 7% higher overall group year-on-year production of 557,000 oz gold for the three months ending Sept. 30, Gold Fields CEO Nick Holland stated of South Deep, which has one of the world’s largest gold deposits: “South Deep has had a tremendous recovery in quarter three. We showed very good results.” South Deep’s production was up to 65,000 oz with all-in costs at just over $1,000/oz.

“South Deep’s an operation now that’s looking really competitive in our group,” Holland said. South Deep, which has a mineral reserve of 38 million ounces, the equivalent to approximately 100,000 gold bullion bars, has a current mine life of 75 years.

As eager investors turn in record numbers to gold, silver and other precious metals, mining companies around the world stand to benefit.

NetworkNewsWire (“NNW”) is a financial news and content distribution company, one of 40+ brands within the InvestorBrandNetwork (“IBN”), that provides: (1) access to a network of wire solutions via NetworkWire to reach all target markets, industries and demographics in the most effective manner possible; (2) article and editorial syndication to 5,000+ news outlets; (3) enhanced press release solutions to ensure maximum impact; (4) social media distribution via IBN millions of social media followers; and (5) a full array of corporate communications solutions. As a multifaceted organization with an extensive team of contributing journalists and writers, NNW is uniquely positioned to best serve private and public companies that desire to reach a wide audience comprising investors, consumers, journalists and the general public. By cutting through the overload of information in today’s market, NNW brings its clients unparalleled visibility, recognition and brand awareness. NNW is where news, content and information converge.