NetworkNewsWire Editorial Coverage: With government spending skyrocketing and the value of the U.S. dollar sinking, savvy investors are turning to gold, which surpassed $2,000 an ounce in August. Experts predict that the precious metal could go much higher in light of depressed bond yields, inflation fears, and the reverberations of COVID-19 on the global economy. Gold’s 32% rally this year has made it “one of the world’s best-performing mainstream assets,” as reported in a Financial Times article. Given global economic conditions and surging demand, savvy mining resource companies are making strategic moves to leverage their expertise and position themselves to reap long-term benefits from the trend. In just the past six months, GoldHaven Resources Corp. (CSE: GOH) (OTCQB: ATUMF) (ATUMF Profile) has entered into agreements to acquire seven impressive gold projects in the highly productive Maricunga Gold Belt of Chile. Gold Fields Limited (NYSE: GFI) (JSE: GFI) has announced an investment of $860 million to process its recently discovered 5 millon ounce discovery at Salares Norte. Kinross Gold Corporation (NYSE: KGC) (TSX: K) released the promising results of a prefeasibility study for its Lobo-Marte project in Chile. Barrick Gold Corporation (NYSE: GOLD) (TSX: ABX) has strengthened its exploration team with the addition of eminent geologists. And Newmont Corporation (NYSE: NEM) (TSX: NGT) is ramping up operations in its Peñasquito, Mexico, property following the government’s designation of mining as an essential activity. 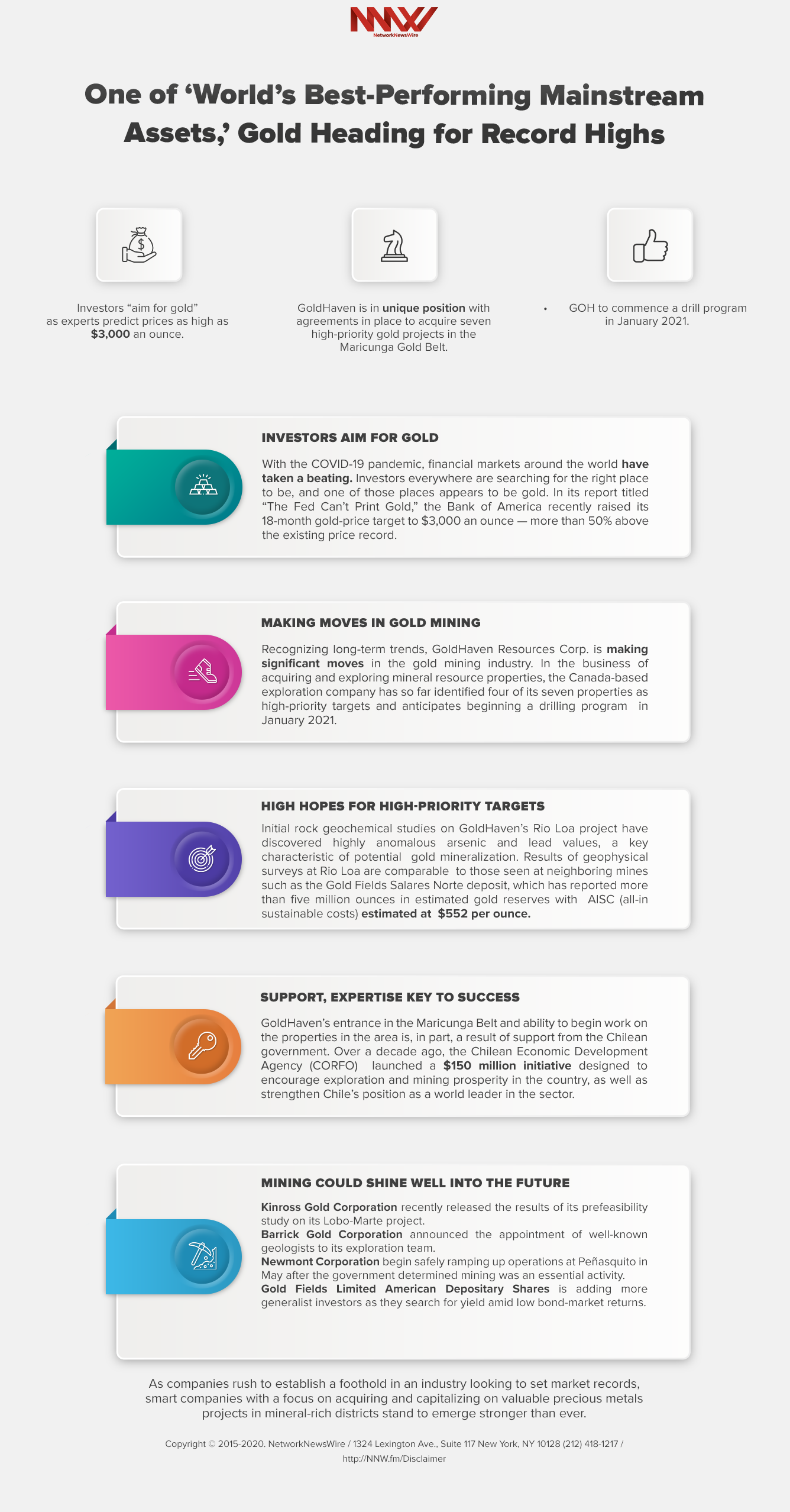 With the COVID-19 pandemic, financial markets around the world have taken a beating. Investors everywhere are searching for the right place to be, and one of those places appears to be gold. In its report titled “The Fed Can’t Print Gold,” the Bank of America recently raised its 18-month gold-price target to $3,000 an ounce — more than 50% above the existing price record (http://nnw.fm/ko9fz).

A “Bloomberg” article reporting the move noted that “analysts including Michael Widmer increased the target from US$2,000 previously, as policy makers across the globe unleash vast amounts of fiscal and monetary stimulus to help shore up economies hurt by the coronavirus.

Recognizing long-term trends, GoldHaven Resources Corp. (CSE: GOH) (OTCQB: ATUMF) is making significant moves in the gold mining industry. In the business of acquiring and exploring mineral resource properties, the Canada-based exploration company has so far identified four of its seven properties as high-priority targets and anticipates beginning a drilling program  in  January 2021.

The substantially gold-mineralized Maricunga Gold Belt  straddles the border between Chile and Argentina, extending approximately 150 kilometers north-south and 30 kilometers east-west. Within the past 20 years, discoveries totaling in excess 100 million ounces of gold, 450 million ounces of silver and 1.3 billion pounds of copper have been made in this belt.

Initial rock geochemical studies on GoldHaven’s Rio Loa project have discovered highly anomalous arsenic and lead values, a key characteristic of potential  gold mineralization. Results of geophysical surveys at Rio Loa are comparable  to those seen at neighboring mines such as the Gold Fields Salares Norte deposit, which has reported more than five million ounces in estimated gold reserves with  AISC (all-in sustainable costs) estimated at  $552 per ounce.

Location is also a key component for GoldHaven’s Coya project, which is situated within close proximity to one of the richest and largest epithermal gold and silver districts in Chile. The La Coipa property, an active mining site owned and operated by Kinross, is in close proximity, and its production of more than 6.2 million ounces of gold to date bodes well for Coya.

Both the Alicia and Roma projects are also near drill ready. Both properties are located in an area just southeast of the Gold Fields Salares Norte deposit, and both projects have undergone preliminary geological mapping and geochemical sampling with more than a thousand soil and rock samples collected and analyzed with promising results. Encouraged by the due diligence exploration results received to date on the Maricunga projects, GoldHaven is working to identify specific drill targets on these properties within the next few months.

GoldHaven’s entrance in the Maricunga Belt and ability to begin work on the properties in the area is, in part, a result of support from the Chilean government. Over a decade ago, the Chilean Economic Development Agency (“CORFO”) launched a $150 million initiative designed to encourage exploration and mining prosperity in the country, as well as strengthen Chile’s position as a world leader in the sector.

As part of CORFO’s program, a total of $15.3 million was allocated to the private equity fund IMT Exploration and was used to evaluate 403 projects beginning in 2011. This led to a generative program carried out between 2016 to 2019, resulting in 126 potential epithermal targets from which 57 field evaluations were made, followed by due diligence work on 19 of those. Work programs were then conducted, including geological mapping, rock and soil sampling and TerraSpec (PIMA) analyses on geochemical grids for alteration mapping, and as a result, the five high-priority Maricunga projects were identified, which GoldHaven is in the process of acquiring.

While no drilling has been carried out on any of the Maricunga projects, the company plans to begin drilling as early as next year. Playing a key role in GoldHaven’s ability to acquire these projects and begin operations so quickly is the company’s solid management team, which has decades of experience in the mining industry and has developed invaluable relationships and contacts within Chile, including both government and the private sector.

GoldHaven president and director David Smith has co-founded two successful environment-related companies that traded on the TSX; both companies were sold, providing a significant profit to shareholders. Smith has been immersed in the mining industry for the last eight years, working in corporate development and finance.

Patrick Burns, VP of exploration and a director, is an exploration geologist. Burns was educated at the University of British Columbia and has spent over 40 years in Chile and Argentina. He speaks fluent Spanish and is essentially a fixture in the mining industry in Chile. He was directly involved in the discovery of the Escondida porphyry copper deposit in Chile, currently the world’s largest copper mine, and the San Cristobal gold mine, also located in Chile. Burns has been involved in publicly traded mining companies in Chile for 35 years.

GoldHaven director Gordon Ellis has more than 50 years of expertise in the mining industry as a professional engineer. Ellis holds an MBA in international finance and  numerous senior positions in the mining industry; he is presently a director of a multibillion-dollar ETF. Scott Dunbar, also a GoldHaven director, is a professor and the department head of Mining  at the University of British Columbia. Dunbar has been involved in mining exploration, geotechnical engineering and mine design projects around the world.

The unique combination of government support and seasoned management experience is a distinctive advantage in setting GoldHaven apart from others maneuvering for position in the gold mining space.

Mining Could Shine Well into the Future

With the price of gold rocketing skyward, the future of the industry looks brighter than ever. Mining companies that establish a strong relative position in the sector at the outset of this trajectory may mine the rewards far into the future.

In line with its objective of finding and developing the best assets, Barrick Gold Corporation (NYSE: GOLD) (TSX: ABX) announced the appointment of well-known geologists McGrath and Sastre to its exploration team in the newly created positions of vice president exploration for Africa and Middle East, and Latin America and Asia Pacific respectively. McGrath has worked with and led exploration teams in Africa, North and South America and Europe, and her experience spans the full spectrum of company size and exploration stages. Sastre was previously mine operations and technical manager at the Veladero gold mine.

Newmont Corporation (NYSE: NEM) (TSX: NGT) begin safely ramping up operations at Peñasquito in May after the government determined mining was an essential activity and identified the placement of COVID-19 restrictions. Newmont will continue to utilize protective measures for workers and neighboring communities, including screening, physical distancing, deep cleaning and avoiding exposure for at-risk individuals.

Gold Fields Limited (NYSE: GFI) (JSE: GFI) is adding more generalist investors as they search for yield amid low bond-market returns. According to Gold Fields CEO Nick Holland, the sector, which once largely drew the attention of specialist funds, is now attracting a broader base of investors who previously considered gold miners too leveraged and high-risk. Bullion’s surge to a record earlier this month is increasing that allure. “We can give you the cash yield through a dividend policy that will pay out more at higher prices because of higher earnings,” Holland said. “I think we’re going to get a lot more interest as people start doing updated valuations on us.”

As companies rush to establish a foothold in an industry looking to set market records, smart companies with a focus on acquiring and capitalizing on valuable precious metals projects in mineral-rich districts stand to emerge stronger than ever.

NetworkNewsWire (“NNW”) is a financial news and content distribution company, one of 40+ brands within the InvestorBrandNetwork (“IBN”), that provides: (1) access to a network of wire solutions via NetworkWire to reach all target markets, industries and demographics in the most effective manner possible; (2) article and editorial syndication to 5,000+ news outlets; (3) enhanced press release solutions to ensure maximum impact; (4) social media distribution via IBN millions of social media followers; and (5) a full array of corporate communications solutions. As a multifaceted organization with an extensive team of contributing journalists and writers, NNW is uniquely positioned to best serve private and public companies that desire to reach a wide audience comprising investors, consumers, journalists and the general public. By cutting through the overload of information in today’s market, NNW brings its clients unparalleled visibility, recognition and brand awareness. NNW is where news, content and information converge.