Electric vehicle (EV) sales will surge to 1.6 million units worldwide this year, from a few hundred thousand in 2014, according to Bloomberg New Energy Finance.  The growing popularity of EVs has had an effect across the entire automotive industry: German automaker Audi (NSU.DE) unveiled a new electric supercar at the Pebble Beach Automotive Week this summer, and new manufacturers are expected to enter the market as well.

Home vacuum manufacturer Dyson has revealed intentions to create an electric vehicle, investing £200 million in a test facility in Hullavington, Wiltshire, England. The test facility will be where Dyson develops its first electric vehicle, which the company has invested £2 billion towards so far. Dyson has partnered with lithium-ion battery producer Sakti3, a firm that claims to have developed a solid-state lithium-ion battery that produces over 400 Wh/kg energy density. Tesla’s Panasonic batteries are considered the industry leader at only 240Wh/kg.

If consumers transition to EVs faster than expected, the scene could be set for a lithium supply crunch as manufacturers seek the raw materials needed in lithium-ion batteries used by the automotive industry.  A Tesla Model S battery pack utilizes 63 kilograms of lithium, an amount that eclipses the amount of lithium currently used in mobile phones and iPads. That requires building a new supply chain several times larger than the existing one.

Companies that might do well in this paradigm shift are those that are working on new technologies to rapidly increase the global supply of lithium. One such company is Standard Lithium (TSXV: SLL) (OTC: STLHF). Standard Lithium is working on a processing  breakthrough to unlock one of the world’s most exciting untapped lithium resources, which happens to be located in the United States. 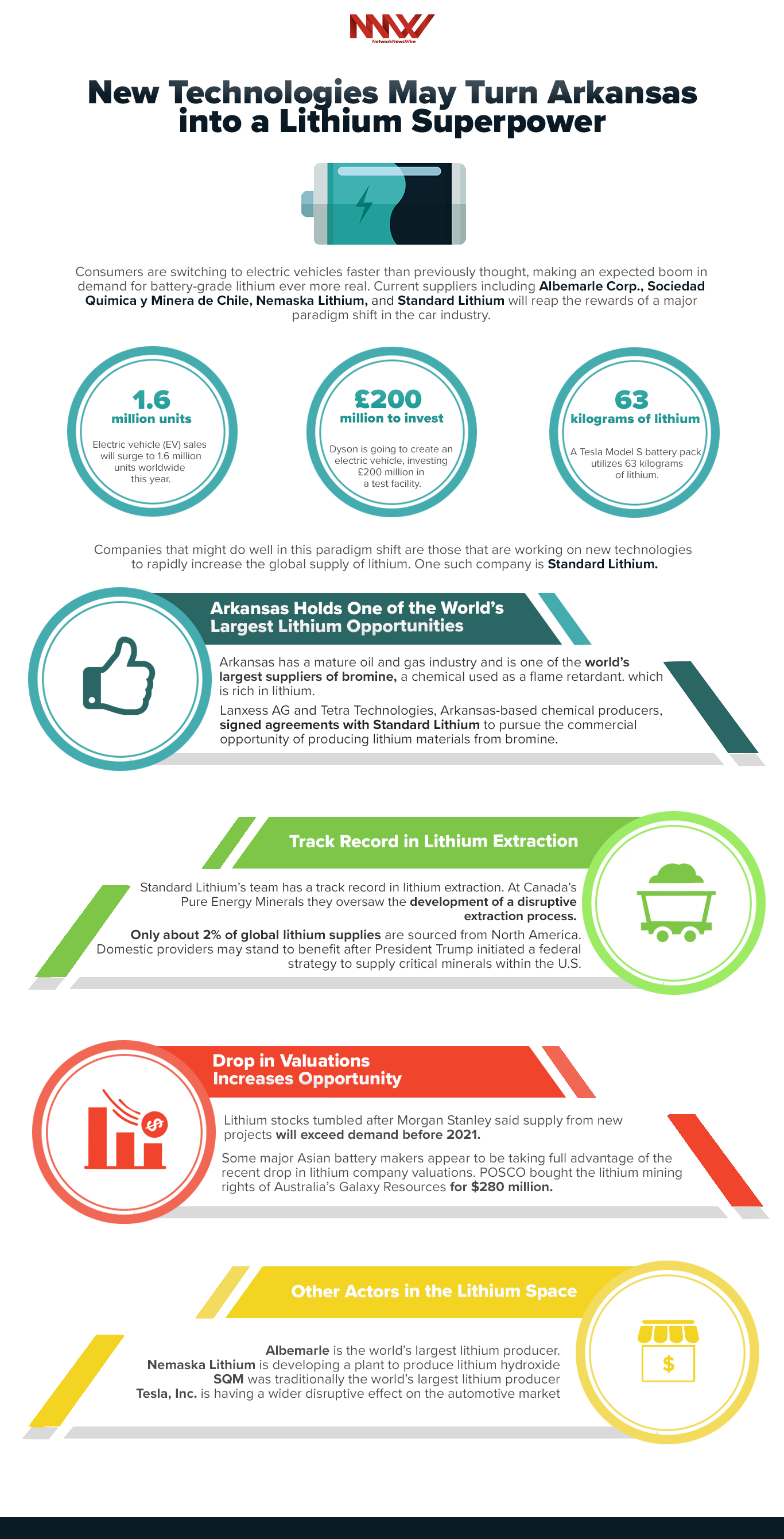 Arkansas holds one of the world’s largest lithium opportunities

Arkansas is not renowned for its role in new technologies. The state has a mature oil and gas industry and is one of the world’s largest suppliers of bromine, a chemical used as a flame retardant. The bromine, extracted from wells deep underground, is rich in lithium.

The Smackover Formation in Arkansas could hold 1 million metric tons of lithium reserves or about a third of the reserves of the massive Atacama Salt Lake in Chile. Albemarle and SQM operate two of the world’s three largest lithium extraction sites in the Atacama.

None of the chemical producers operating in Arkansas have figured out how to separate this massive resource from the brine. Albemarle owns a major bromine plant in Arkansas and is conducting its own experiments to find a breakthrough. Lanxess AG (NYSE: TTI) and TETRA Technologies, Inc. (FWB: LXS), two other chemical producers based in the region, recently signed agreements with Standard Lithium to pursue  the commercial opportunity of producing lithium battery materials from this strategic resource.

Chief Operating Officer Andy Robinson, who holds a doctorate in geochemistry, has overseen resource development projects around the world. With his team of global experts, Standard Lithium has developed a new rapid lithium extraction process that better extracts the material from a variety of brine sources. The company recently hired Prof. Barry Sharpless, a Nobel Laureate in chemistry, to the company’s Scientific Advisory Council.

Mintak and his team are betting on being able to leapfrog competitors in the lithium supply space by avoiding several of the lengthy and time-consuming phases of developing a greenfield lithium operation. A traditional brine project such as those operated by Albemarle and SQM in Chile requires several phases including resource assessment, permitting, earth-moving and process-testing. Other lithium projects in Argentina have shown lengthy development timelines,  which can take up to a decade or more to come online.

By working with permitted chemical producers such as Lanxess and Tetra, which already extract raw material feedstock (brine) from the ground, Standard Lithium can leverage existing infrastructure to eliminate most of the steps toward commercial production. Quick project execution will be key if the EV transformation happens faster than expected.

Only about 2% of global lithium supplies are sourced from North America, according to SQM. Domestic providers may stand to benefit after President Donald Trump initiated a federal strategy to supply critical minerals from within the United States. Lithium is one of a handful of critical minerals that are deemed to be of high importance to the industries of the twenty-first  century under the U.S. government strategy.

Tesla is particularly dependent on lithium supplies and has held talks with SQM to sign a long-term supply agreement for a giant lithium-ion battery factory known as the Gigafactory that it is building in Nevada. General Motors is introducing at least 20 EV models by 2023, including the Chevrolet Bolt and Cadillac CT6 Plug-in, CEO Mary Barra said in March.

Lithium stocks tumbled this year after investment bank Morgan Stanley said supply from new projects will exceed demand before 2021. That investment advice might not fully reflect the fact that consumers are switching to EVs from internal combustion engines (ICEs) faster than expected, according to London-based analysts Benchmark Mineral Intelligence.

Several countries, including China, are mandating shifts from ICE production to EV production, a step that will rapidly accelerate the demand for lithium-ion batteries, according to London-based consultancy Roskill. With government mandates accelerating demand for lithium, supply won’t keep up with need. This could ultimately lead to major lithium buyers looking to back an emerging producer with a large resource such as Standard Lithium.

Other Actors in the Lithium Space

Albemarle (NYSE: ALB) is the world’s largest lithium producer, producing the material from rock mines in Australia and from brine operations in Chile. Albemarle also produces bromine in Arkansas and is experimenting with chemical processes to separate the lithium found in its raw material feedstock. The company is looking to expand its current lithium production capacity to 265,000 tons a year, from 65,000 tons a year at present.

Nemaska Lithium (TSX: NMX) (OTC: NMKEF) is developing a plant to produce car battery-grade lithium hydroxide and recently signed a take-or-pay 5-year supply agreement with Northvolt, a company that is building Europe’s largest battery factory. Nemaska Lithium recently obtained a $75 million payment as part of a multi-stage loan to finance its Whabouchi mine.

Sociedad Quimica y Minera S.A. (NYSE: SQM) based in Santiago, Chile was traditionally the world’s largest lithium producer until it was overtaken by Albemarle in recent years. Sociedad Quimica y Minera S.A. recently secured an agreement with the Chilean government to carry out a major expansion of its lithium brine operation in the Atacama Desert.

Tesla, Inc. (NASDAQ: TSLA) is rapidly expanding output of its Model S and is having a wider disruptive effect on the global automotive market as traditional carmakers switch to electric vehicles from the internal combustion engine. Tesla is building a lithium-ion battery factory in Nevada and is currently seeking a long-term supply agreement with Chile.