NetworkNewsWire Editorial Coverage: The need for nickel for batteries is driving greater investment in mines in Indonesia. 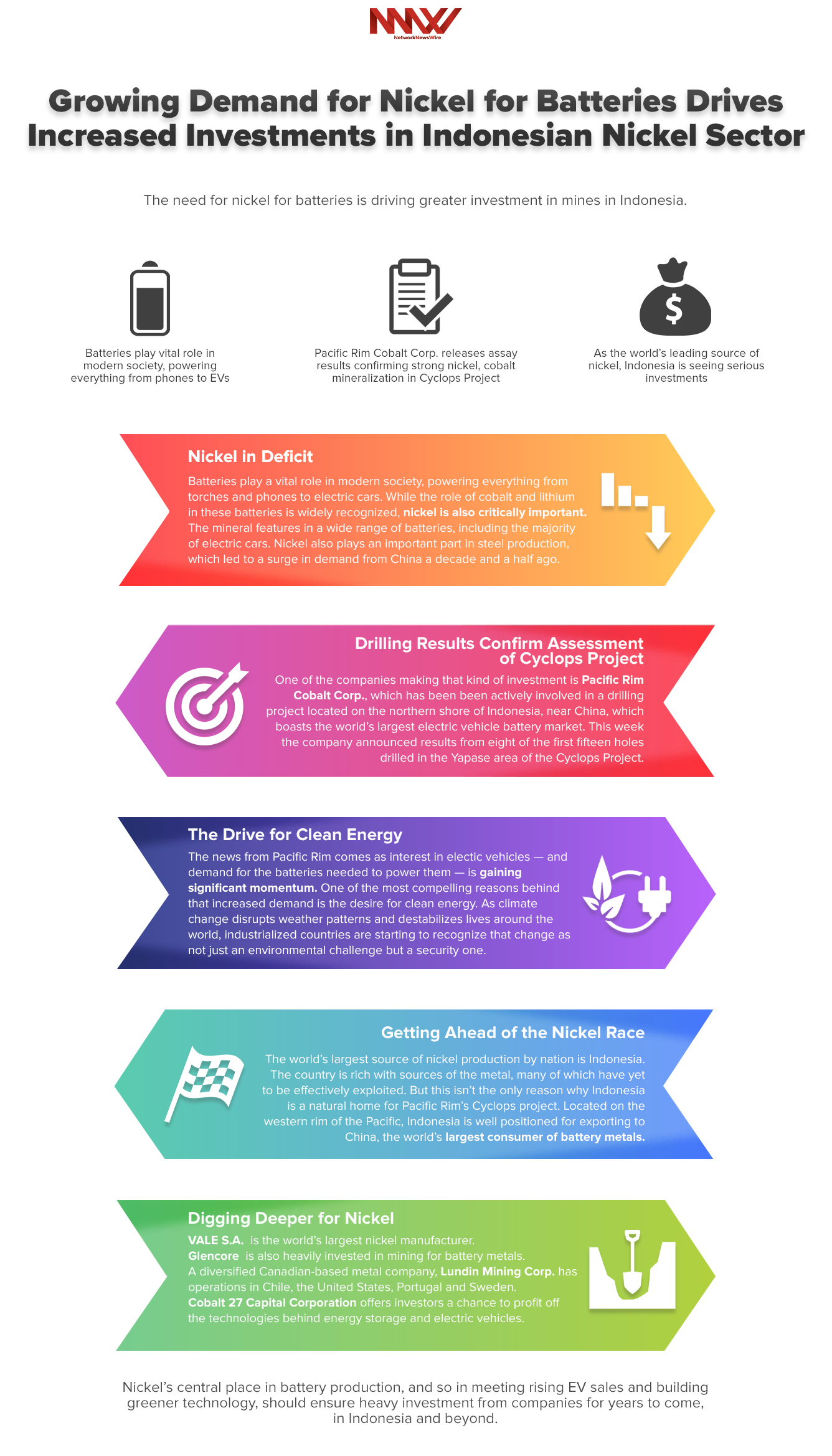 Batteries play a vital role in modern society, powering everything from torches and phones to electric cars. While the role of cobalt and lithium in these batteries is widely recognized, nickel is also critically important. The mineral features in a wide range of batteries, including the majority of electric cars.

Nickel also plays an important part in steel production, which led to a surge in demand from China a decade and a half ago. At that time, production efforts increased to meet the demand; today, the growing importance of nickel in batteries is causing fresh pressure, along with a supply deficit. This increasing need for nickel has sparked more investments in nickel-producing regions — specifically Indonesia, the world’s largest nickel producer.

One of the companies making that kind of investment is Pacific Rim Cobalt Corp. (OTCQB: PCRCF) (CSE: BOLT), which has been been actively involved in a drilling project located on the northern shore of Indonesia, near China, which boasts the world’s largest electric vehicle battery market. This week the company announced results from eight of the first fifteen holes drilled in the Yapase area of the Cyclops Project. The drilling confirmed the development of a complete mineralized laterite profile and is starting to confirm grades and widths that form the basis of the project’s historical estimate.

“The Cyclops Project was acquired following extensive due diligence on over 40 projects across Indonesia,” said Pacific Rim CEO Ranjeet Sundher. “The latest drill results continue to confirm our initial impression, assessment and observations of the project’s potential, which is beneficially located in proximity to the world’s largest buyer of battery metals. We expect the near-surface nature of cobalt and nickel mineralization at the Cyclops Project will lend itself well to low-cost, logistically straightforward drilling. We anticipate the opportunity to undertake a resource calculation study, as well as ongoing metallurgy and process option testing, will present itself in the near future.”

Pacific Rim began a 50-hole core drilling program in mid-January on areas of laterite delineated by a geological mapping and a hand-augur geochemistry program. A total of 15 holes have been completed, covering a total of 255 meters, with hole depths ranging from 13 to 29 meters. Where possible, holes were drilled to fresh rock in order to intersect the full laterite profile.

The Drive for Clean Energy

The news from Pacific Rim comes as interest in electric vehicles — and demand for the batteries needed to power them — is gaining significant momentum. One of the most compelling reasons behind that increased demand is the desire for clean energy.

As climate change disrupts weather patterns and destabilizes lives around the world, industrialized countries are starting to recognize that change as not just an environmental challenge but a security one. Those countries have responded by implementing clean-energy and clean-air policies, which are transforming the way that automobile companies work.

More than 40 automakers are pivoting towards electric vehicles. While Tesla is grabbing most of the headlines, most recently by reducing the price on its Model 3 to make electric cars more widespread, more established car companies are also getting into the game. It took five years to sell the first million EVs but just six months to sell the last million. Hybrid cars are increasingly common, as are the charging points they need, and all but one of the major electric vehicle manufacturers use nickel in their batteries.

This is creating the demand that Pacific Rim is strategically working to address. As electric cars come to dominate the roads, the demand for the minerals used in them is set to soar.

Getting Ahead of the Nickel Race

The world’s largest source of nickel production by nation is Indonesia. The country is rich with sources of the metal, many of which have yet to be effectively exploited. But this isn’t the only reason why Indonesia is a natural home for Pacific Rim’s Cyclops project.

Located on the western rim of the Pacific, Indonesia is well positioned for exporting to China, the world’s largest consumer of battery metals. China has seen massive economic development in recent decades, thanks to the modernizing efforts of the country’s leaders. While modernization can be hard to balance with environmental protection, the Chinese leadership are well aware of the problems caused by environmental degradation, not the least of which is due to the heavy pollution in major Chinese cities. Those leaders are therefore encouraging clean alternatives, leading to a boom in electric car research and development.

Investing in exports to China is a sound strategy for any company specializing in battery metals. The country not only produces batteries for its own use but also makes them for export, thus creating a fresh wave of demand for nickel in a country that drove a previous nickel boom just after the millennium. This boom is drawing more companies to Indonesia. By setting up a fresh nickel and cobalt mining operation within easy reach of China, Pacific Rim is tapping into both supply and demand, ensuring an accessible market for its products.

Pacific Rim has positioned itself as an early mover in the race for Indonesia battery metals. The company has gained 100 percent control of the 5,000 hectare nickel and cobalt Cyclops Project. With production and environmental permits secured, the project benefits from excellent infrastructure, including close proximity to an eager workforce and supplies, sealed roads, ocean access, nearby port facility and gentle topography. The existing road system also enables year-round access to the project and connections to key nearby cities, including Sentani and Jayapura.

As demand rises, several companies are expanding their interest in nickel.

VALE S.A. (NYSE: VALE) is the world’s largest nickel manufacturer and, like Pacific Rim, it has made Indonesia an important part of its mining strategy. The country is one of four where Vale operates, alongside Brazil, Canada, and New Caledonia. Vale has spent billions on developing Indonesian nickel production for export to countries including China. Vale makes a substantial effort to have a positive impact in the communities where it mines, with policies designed to mitigate the environmental impact of mining and to provide social benefits to locals. This is reflected in the fast moves Vale has made in response to a dam breach at Brumadinho, where it has poured money into helping locals affected by the accident and taken steps to protect the local environment even as it sets to work on rebuilding.

Glencore (OTC: GLNCY), one of the world’s largest diversified natural resources companies, is also heavily invested in mining for battery metals. Assets in Australia, Canada and Europe produce the company’s supply of nickel, as well as byproduct metals such as cobalt and copper. In addition to mining nickel, Glencore is one of the largest recyclers and processors of nickel-bearing products such as batteries, taking the minerals from discarded goods and finding ways to reuse them.

A diversified Canadian-based metal company, Lundin Mining Corporation (TSX: LUN) (OTC: LUNMF) has operations in Chile, the United States, Portugal and Sweden. Nickel is one of its leading products, alongside copper and zinc. Good results in the fourth quarter ensured that the company achieved or exceeded its production targets at all its operations in 2018, providing plenty of material for use in batteries and other manufacturing.

A leading nickel and cobalt investment vehicle, Cobalt 27 Capital Corporation (TSX.V: KBLT) (OTCQX: CBLLF) offers investors a chance to profit off the technologies behind energy storage and electric vehicles. To this end, it is investing in nickel production through a mine in Papua New Guinea. Like Indonesian Papua, Papua New Guinea is rich in nickel deposits and well located for exports across the Pacific to China.

Nickel’s central place in battery production, and so in meeting rising EV sales and building greener technology, should ensure heavy investment from companies for years to come, in Indonesia and beyond.