NetworkNewsWire Editorial Coverage: With climate change a hot topic and the Green New Deal providing a possible pathway for progress, solar power may be a more viable — and profitable — source of energy than ever before.

Recognizing a building interest in and support of renewable energy sources such as solar energy, smart companies are finding ways to establish a strong foothold in the sector. SinglePoint Inc. (OTCQB: SING) (SING Profile) just signed an asset purchase agreement with Direct Solar and AI Live Transfers, providing what has been described as the Lending Tree model for solar business. First Solar Inc. (NASDAQ: FSLR) is working to complete construction and upgrades of its manufacturing facilities, enabling the company to produce its most advanced Series 6 solar panels. NextEra Energy Inc. (NYSE: NEE) was ranked by Forbes as No. 21 among the top 57 companies that globally change the world, in part because Florida Power & Light Company, one of NextEra Energy’s principal subsidiaries, is in the midst of one of the largest solar expansions in the world. NRG Energy Inc. (NYSE: NRG) was recently recognized at Smart Energy Decisions’ 2019 Innovative Summit for its landmark new sustainability product, Renewable Select. And in Virginia, Dominion Energy Inc. (NYSE: D) has launched a major bid to significantly increase its solar and wind energy generation under the state’s new Grid Transformation & Security Act. 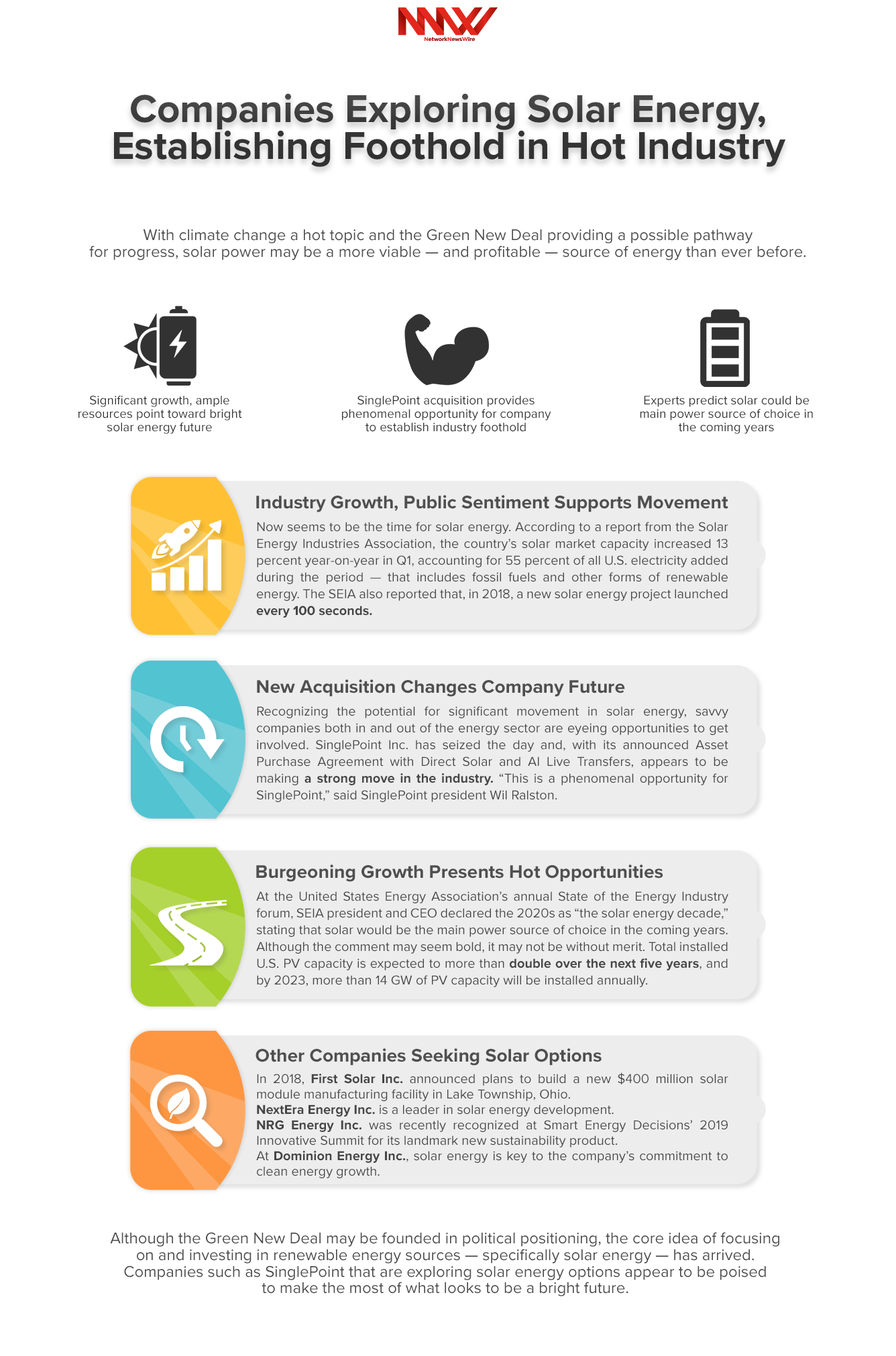 Now seems to be the time for solar energy. According to a report from the Solar Energy Industries Association, the country’s solar market capacity increased 13 percent year-on-year in Q1, accounting for 55 percent of all U.S. electricity added during the period — that includes fossil fuels and other forms of renewable energy. The SEIA also reported that, in 2018, a new solar energy project launched every 100 seconds.

In addition, Advanced Energy Now projects that the solar rooftop market will reach $4.14 billion by 2022, growing at a compound annual growth rate of 9.7 percent until then. The public appears to be behind that growth, with more than three-quarters of Americans feeling that their utility provider should invest more heavily in solar energy.

The resources are certainly available. According to the Office of Energy Efficiency and Renewable Energy, the amount of sunlight hitting the Earth every couple of hours could provide the world’s energy needs for an entire year. And with the increased focus created by the New Green Deal and other environmentally friendly movements, this could be the year for the sun to shine on solar energy.

Recognizing the potential for significant movement in solar energy, savvy companies both in and out of the energy sector are eyeing opportunities to get involved. SinglePoint Inc. (OTCQB: SING) has seized the day and, with its announced Asset Purchase Agreement with Direct Solar and AI Live Transfers, appears to be making a strong move in the industry.

“This is a phenomenal opportunity for SinglePoint,” said SinglePoint president Wil Ralston. “This changes the entire financial fundamentals for the company and enables us to continue to push forward with opportunities to continue increasing shareholder value and the overall value of SinglePoint.”

Direct Solar has seen exponential growth recently. In the past year, the company has surpassed $1,500,000 in revenue and has posted approximately 60 percent gross margins. This month alone Direct Solar generated approximately $321,230. Company officials project  record revenues for the company throughout the year after the acquisition is finalized.

At the United States Energy Association’s annual State of the Energy Industry forum, SEIA president and CEO Abby Hopper declared the 2020s as “the solar energy decade,” stating that solar would be the main power source of choice in the coming years.

Although the comment may seem bold, it may not be without merit. Total installed U.S. PV capacity is expected to more than double over the next five years, and by 2023, more than 14 GW of PV capacity will be installed annually. The U.S. Energy Information Administration projects that utility-scale solar’s share of total generation in the United States will grow by 10 percent this year alone, and by 17 percent in 2020, joining wind as the fastest-growing sources of electricity over that time period. And some experts say those numbers aren’t aggressive enough.

This burgeoning solar growth presents a major opportunity for SinglePoint and Direct Solar to establish a leadership role within a promising industry. SinglePoint is well equipped to make this move.

Initially a full-service mobile technology provider, the company has grown through diversification into the horizontal market and has created an impressive portfolio by acquiring an interest in undervalued subsidiaries. Throughout this process, SinglePoint has built a reputation for researching opportunities where it can be active within a company and influence strategy and direction. Target companies are typically undervalued and cash-flow positive with high potential and verified assets.

Self-described as the world’s largest producer of wind and solar energy, NextEra Energy Inc. (NYSE: NEE) is a leader in solar energy development. Almost a decade ago, the company’s FPL Group broke ground on a 10-MW solar power facility at the Kennedy Space Center, and in 2015, the company’s Desert Sunlight Solar Farm — one of the world’s largest solar projects — began commercial operation in Riverside County, California. A year later, FPL partnered with Daytona International Speedway to complete the FPL Solar Circuit, a system of more than 7,000 solar panels built as canopies that not only generate electricity for FPL customers and the speedway operations but also offer shade to face fans. Currently, FPL is midst of completing one of the largest solar expansions ever, bringing eight new solar energy centers online in 2018 with plant so install more than 10 million solar panels by 2023.

NRG Energy Inc. (NYSE: NRG) was recently recognized at Smart Energy Decisions’ 2019 Innovative Summit for its landmark new sustainability product, Renewable Select. This new solar energy plan is designed for NRG Energy business customers who were interested in renewable energy but hesitant to give up cost certainty. Keeping those needs in mind, NRG Energy developed a plan that offers customer clean, green, accessible energy at a fixed price without the complexity often associated with renewable options. NRG’s team sourcing the actual energy needed then packages it in a standard contract with straightforward terms. As a result, a dedicated solar facility and 100 percent of its production is assigned to an individual business.

At Dominion Energy Inc. (NYSE: D), solar energy is key to the company’s commitment to clean energy growth. Since 2013, Dominion has helped bring 1,200-megawatts (MW) of large-scale solar into operation in nine states — enough energy to power about 300,000 homes at peak output. The company plans to expand large-scale solar energy in Virginia by 2020, with an estimated 5,200 MW of new solar energy potentially added in the next 25 years.

Although the Green New Deal may be founded in political positioning, the core idea of focusing on and investing in renewable energy sources — specifically solar energy — has arrived. Companies such as SinglePoint that are exploring solar energy options appear to be poised to make the most of what looks to be a bright future.