NetworkNewsWire Editorial Coverage: From the coronavirus pandemic to nationwide public unrest, 2020 has been a year that has inspired re-imagining public safety as the country has poignantly witnessed the challenges faced by law enforcement and security services across all verticals. The answers to some of society’s greatest problems today are not to be found simply in man power; rather, many of the answers lie in technology, like that of Knightscope Inc. (Profile), which is designed to augment and improve existing security infrastructure. Silicon Valley-based Knightscope, with its lineup of fully autonomous security robots, aligns with companies such as Palantir Technologies Inc. Class A (NYSE: PLTR), Axon Enterprise Inc. (NASDAQ: AAXN), L3Harris Technologies Inc. (NYSE: LHX) and Velodyne Lidar Inc. (NASDAQ: VLDR), which all share a passion for solving an array of security and safety problems, as well as protecting life and data with next-generation technology. 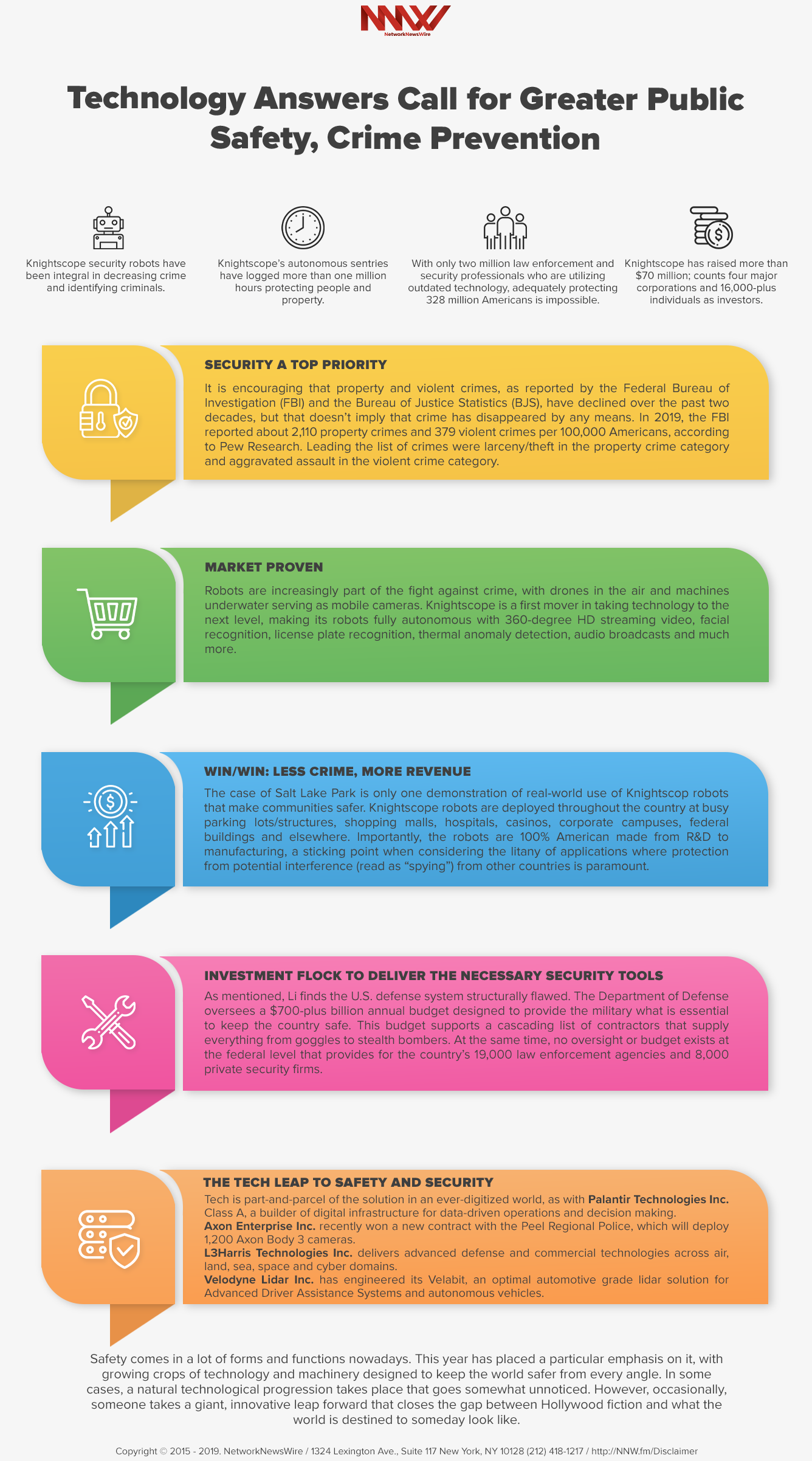 It is encouraging that property and violent crimes, as reported by the Federal Bureau of Investigation (FBI) and the Bureau of Justice Statistics (BJS), have declined over the past two decades, but that doesn’t imply that crime has disappeared by any means. In 2019, the FBI reported about 2,110 property crimes and 379 violent crimes per 100,000 Americans, according to Pew Research. Leading the list of crimes were larceny/theft in the property crime category and aggravated assault in the violent crime category.

Where the numbers actually fall in real life is a little more difficult to discern, considering the majority of crimes actually go unreported every year. One of the reasons cited for failing to report a crime is the belief that police can’t help. While disheartening, it is not a tremendous surprise considering that for years police forces have been reportedly understaffed amid a growing population.

As explained by Knightscope, Inc. CEO William Santana Li, simple math illuminates the situation as a problem of numbers. There are one million law enforcement professionals and one million security personnel in the United States. Accounting for the number of hours these individuals can work on a daily and weekly basis, that equates to about 500,000 people at any one time trying to protect 328 million Americans across the entire country at any given moment.

“That’s why you have a trillion-dollar negative economic impact of crime on the U.S. every, single year,” expounded Li in a recent interview. He sees the defense budget structure contributing to the problem insomuch that, unlike the military, it doesn’t provide police and security the innovation and tools they need to do their job effectively. Addressing this unattended need has been a driving force in the development of Knightscope and its portfolio of robots and operations center software.

Robots are increasingly part of the fight against crime, with drones in the air and machines underwater serving as mobile cameras. Knightscope is a first mover in taking technology to the next level, making its robots fully autonomous with 360-degree HD streaming video, facial recognition, license plate recognition, thermal anomaly detection, audio broadcasts and much more.

Knightscope offers three different models of its machines for indoor and outdoor applications, along with a state-of-the-art Knightscope Security Operations Center (KSOC) user interface. With more than one million hours of service already logged with paying clients, Knightscope is distinguished as the only company in the world operating fully autonomously without human intervention 24/7/365 across an entire country.

The Knightscope robots have proven their value to deter crime. A single case study from use of a Knightscope K5 robot during a six-month period by the Huntington Park Police Department in Salt Lake Park, California, provides evidence of this. Compared to a year earlier, the area saw a 10% reduction in calls for service, a 46% reduction in crime reports, a 27% increase in arrests and a 68% reduction in citations during the time the K5 unit was present.

The case of Salt Lake Park is only one demonstration of real-world use of Knightscope robots that make communities safer. Knightscope robots are deployed throughout the country at busy parking lots/structures, shopping malls, hospitals, casinos, corporate campuses, federal buildings and elsewhere. Importantly, the robots are American made from R&D to manufacturing, a sticking point when considering the litany of applications where protection from potential interference (read as “spying”) from other countries is paramount.

The company can trumpet many accolades for its robots. For instance, customers have reported that the robots have been instrumental in issuing warrants for sexual predators, proving a slip-and-fall lawsuit was a sham, solving a hit-and-run crime, preventing a fraudulent insurance claim, thwarting a fire, catching a thief and deterring trespassing, among other things.

Knightscope offers its robots through its subscription Machine-as-a-Service (MaaS) business model. The subscription is all inclusive, covering everything from freight, machinery and setup to maintenance and support. Subscriptions vary in price, ranging from $4 to $11 per hour and are structured on an annual basis for the robots to operate 24/7/365.

With a cost basis of approximately $60,000 to build a machine, the company targets a return on its investment in the first year of a subscription. Netting-out operating and other expenses, Li estimates that each machine should generate about $250,000 in profit over a five-year period.

As mentioned, Li finds the U.S. defense system structurally flawed. The Department of Defense oversees a $700-plus billion annual budget designed to provide the military what is essential to keep the country safe. This budget supports a cascading list of contractors that supply everything from goggles to stealth bombers. At the same time, no oversight or budget exists at the federal level that provides for the country’s 19,000 law enforcement agencies and 8,000 private security firms.

Li and his team are deeply passionate about and committed to improving the security landscape. As with any entrepreneurial endeavor, they took their fair share of body slams and doors in the face to get things going in the early days. The company’s big break came when it won Demo Day at the Plug and Play Tech Center in December 2013 with the accompanying media attention.

Developing the autonomous sentry technology and being the first to bring a next-gen tech to market has subsequently captured the attention of thousands of additional investors. To date, management has raised more than $70 million and counts four major corporations and more than 16,000 people as investors in Knightscope. The company is currently raising additional capital through a Reg A+ offering ahead of plans to become a public entity.

The Tech Leap to Safety and Security

When man power isn’t enough — or sometimes isn’t even a viable option — technology often saves the day. In some cases, tech is part-and-parcel of the solution in an ever-digitized world, as with Palantir Technologies Inc. Class A (NYSE: PLTR), a builder of digital infrastructure for data-driven operations and decision making. Among a roster of security applications, Palantir software has been used to stop terrorist attacks and combat child trafficking.

Amid its efforts to leverage technology platforms for better public safety, Scottsdale, Arizona based Axon Enterprise Inc. (NASDAQ: AAXN) recently won a new contract with the Peel Regional Police, which will deploy 1,200 Axon Body 3 cameras along with an additional 515 licenses (1,715 total) to its digital evidence management solution, Axon Evidence. Among its other capabilities, the new cameras are able to live stream for appropriate personnel to watch in real-time.

Safety comes in a lot of forms and functions nowadays. This year has placed a particular emphasis on it, with growing crops of technology and machinery designed to keep the world safer from every angle. In some cases, a natural technological progression takes place that goes somewhat unnoticed. However, occasionally, someone takes a giant, innovative leap forward that closes the gap between Hollywood fiction and what the world is destined to someday look like.

NetworkNewsWire (“NNW”) is a financial news and content distribution company, one of 40+ brands within the InvestorBrandNetwork (“IBN”), that provides: (1) access to a network of wire solutions via InvestorWire to reach all target markets, industries and demographics in the most effective manner possible; (2) article and editorial syndication to 5,000+ news outlets; (3) enhanced press release solutions to ensure maximum impact; (4) social media distribution via IBN millions of social media followers; and (5) a full array of corporate communications solutions. As a multifaceted organization with an extensive team of contributing journalists and writers, NNW is uniquely positioned to best serve private and public companies that desire to reach a wide audience comprising investors, consumers, journalists and the general public. By cutting through the overload of information in today’s market, NNW brings its clients unparalleled visibility, recognition and brand awareness. NNW is where news, content and information converge.