NetworkNewsWire Editorial Coverage: In a natural response to injury or infection, the body produces chemicals that trigger the immune system to release antibodies and proteins plus increase blood flow to the afflicted area, which aids healing and produces inflammation. However, the immune system and the inflammatory processes have pernicious aspects far removed from beneficial healing. In fact, inflammation has been directly linked to a wide variety of physical and mental health maladies. Inflammation is also a symptom of infectious diseases, implicated in noninfectious diseases, and new findings show a causal relationship with postsurgical trauma. Inflammatory diseases are recognized as the most significant cause of death in the world, with more than 50% of all deaths attributed to inflammation-related diseases. The recognition of the connection between inflammation and disease sparked a flurry of biotech research and a new generation of drug development to treat previously untreatable disorders. World renowned scientists that now lead 180 Life Sciences Corp. (NASDAQ: ATNF) (180 Profile) pioneered the research and development of one of the first anti-inflammatory therapeutics to ever reach market, and today these drugs generate multiple billions of dollars in annual sales. Critical to creation of some the most important and profitable drugs ever on the market, the 180 team is in hot pursuit of new anti-inflammatory blockbusters with active programs in both preclinical and clinical studies. The world’s largest and most broadly based health-care company, Johnson & Johnson (NYSE: JNJ), owns Remicade (infliximab), a blockbuster several times over with approved use in a range of inflammatory diseases. The founders of 180 Life Sciences discovered the anti-TNF (tumor necrosis factor) drug class that led to the development of Remicade and to a $4.9 billion merger between JNJ and Centocor Biotech. AbbVie Inc. (NYSE: ABBV) owns Humira, an anti-TNF therapeutic and top-selling drug in the world. The scientists at 180 Life Sciences licensed the anti-TNF technology in development of Humira. One of the world’s leading biotech’s, Amgen Inc. (NASDAQ: AMGN), bought Celgene’s blockbuster anti-inflammatory drug Otezla in 2019 for $13.4 billion in cash, and Eli Lilly (NYSE: LLY) recently announced a deal for Rigel Pharmaceuticals’ autoimmune and inflammatory diseases treatment for $960 million. In addition to delivering much-needed relief for previously untreatable maladies, eye-popping sales and king-sized acquisitions are likely to accelerate in the anti-inflammatory space, as more new and highly effective drugs come to market. 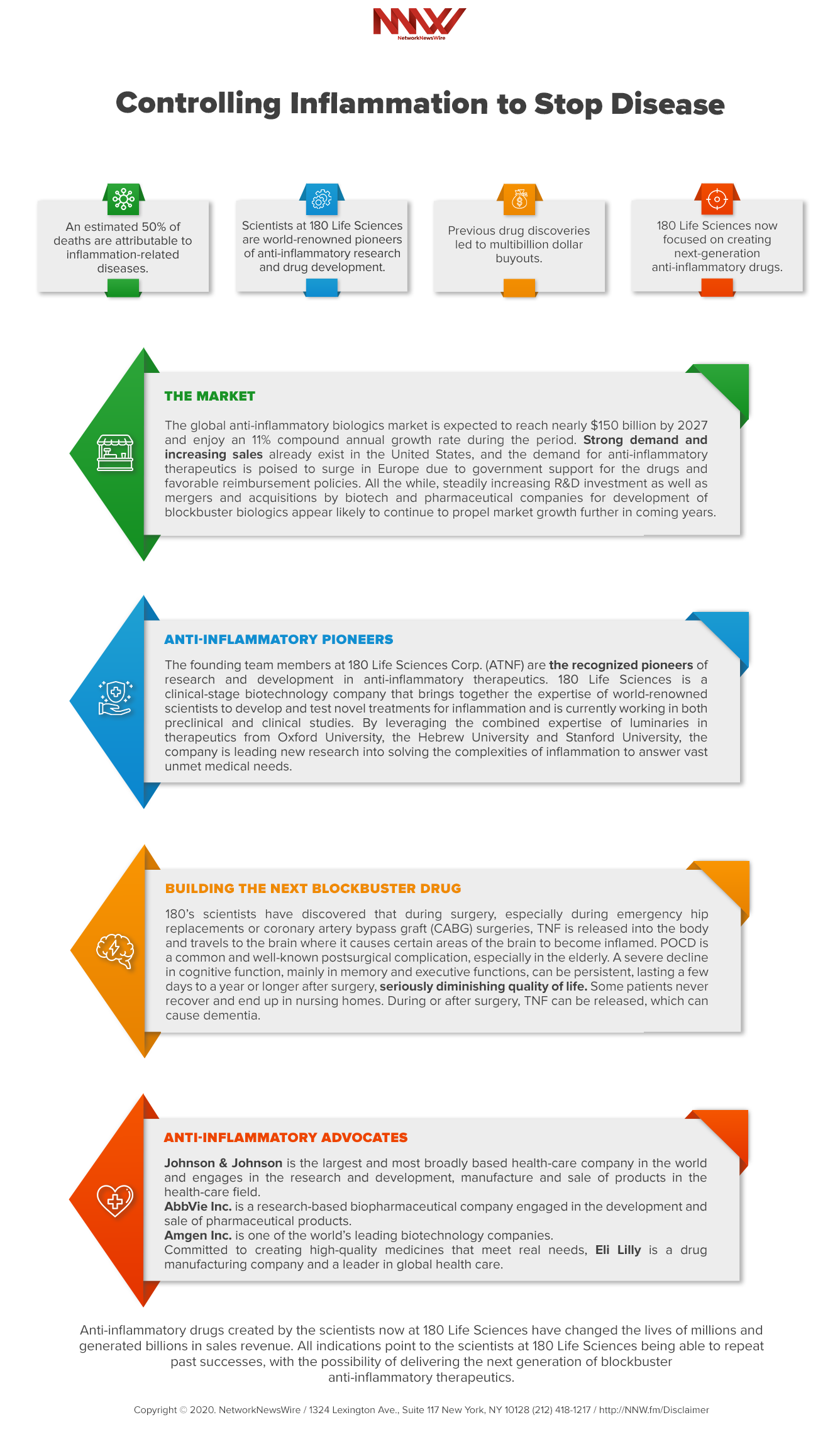 The global anti-inflammatory biologics market is expected to reach nearly $150 billion by 2027 and enjoy an 11% compound annual growth rate during the period. Strong demand and increasing sales already exist in the United States, and the demand for anti-inflammatory therapeutics is poised to surge in Europe due to government support for the drugs and favorable reimbursement policies. All the while, steadily increasing R&D investment, as well as mergers and acquisitions by biotech and pharmaceutical companies for development of blockbuster biologics appear likely to continue to propel market growth further in coming years.

Ongoing research and clinical trials for anti-tumor necrosis factor (anti-TNF) antibodies in autoimmune inflammatory diseases such as rheumatoid arthritis, psoriatic arthritis, plaque psoriasis, ulcerative colitis and Crohn’s disease seem likely to only add to market growth and expansion as new anti-TNF uses are found. The wild card is that new findings implicate inflammation in a variety of other disorders with high unmet medical need. Research is ongoing and clinical trials are in progress with more planned for later this year. With any success, market forecasts many have to be adjusted substantially higher.

The founding team members at 180 Life Sciences Corp. (NASDAQ: ATNF) are the recognized pioneers of research and development in anti-inflammatory therapeutics. 180 Life Sciences is a clinical-stage biotechnology company that brings together the expertise of world-renowned scientists to develop and test novel treatments for inflammation and is currently working in both preclinical and clinical studies. By leveraging the combined expertise of luminaries in therapeutics from Oxford University, the Hebrew University and Stanford University, the company is leading new research into solving the complexities of inflammation to answer vast unmet medical needs.

180 Life Sciences has active programs developing novel drugs in separate areas of inflammation to offer solutions to large market maladies that have no effective therapies. The company is developing potential treatment for arthritic conditions using synthetic cannabidiol analogs and is also developing a treatment for ulcerative colitis in ex-smokers.

180’s lead platform, fibrosis & anti-TNF, with its lead clinical program in Phase 2b/3 stage, is led by Professor Sir Marc Feldmann (executive co-chairman of 180 Life Sciences), a renowned immunologist and pioneer of anti-TNF therapy, and Professor Jagdeep Nanchahal, who has pioneered the treatment of fibrosis of the hand (Dupuytren’s disease). The program is designed to address four critical areas of inflammation to treat:

Building the Next Blockbuster Drug

180’s scientists have discovered that during surgery, especially during emergency hip replacements or coronary artery bypass graft (CABG) surgeries, TNF is released into the body and travels to the brain where it causes certain areas of the brain to become inflamed. POCD is a common and well-known postsurgical complication, especially in the elderly. A severe decline in cognitive function, mainly in memory and executive functions, can be persistent, lasting a few days to a year or longer after surgery, seriously diminishing quality of life. Some patients never recover and end up in nursing homes. During or after surgery, TNF can be released, which can cause dementia. There’s strong evidence the body’s inflammatory response to surgery plays an important role in POCD onset, and anti-TNF therapeutics may well be the solution.

Reports indicate more than 350,000 coronary artery bypass procedures are performed in the country every year and more than 300,000 hip fractures occur annually in the U.S. alone. POCD incidence is greatest after major cardiovascular surgery, and estimated incidence ranges from 30 to 80% during the first few weeks postsurgery and up to 60% after three to six months. Research initiatives have evaluated whether actions taken before, during and after surgery can lessen the damaging effects of inflammation. Administering anti-inflammatory agents before surgery may offer substantial benefits, and 180 Life Sciences is in hot pursuit of a preventive therapeutic regimen.

The 180 Life Sciences team has found that the trauma associated with surgery leads to the release of inflammatory mediators. These mediators, including TNF and Interleukin 1 beta (IL-1β), lead to increased permeability of the blood brain barrier and inflammation of critical parts of the brain, including the hippocampus, the part of the brain involved in the formation of new memories and associated with learning and emotions. Damage to this area leads to cognitive decline.

180 Life Sciences is convinced its anti-TNF program can be used to reduce or prevent POCD incidence. The company filed patent claims that have been granted and licensed from Kennedy Trust, UK. 180 Life Sciences also intends to initiate a phase 2 trial of pre-operative anti-TNF therapeutics in hip fracture surgery by Q4 2021  or early 2022 . depending on resolution of th COVID epidemic, with a single dose of anti-TNF administered just prior to surgery. If successful, 180’s novel approach could become the standard of care to prevent POCD in coronary artery bypass procedures, hip surgery and more. As a standard-of-care protocol, the number of potential applications globally is significant and could potentially lead to the next blockbuster drug from the scientists at 180 Life Sciences.

Johnson & Johnson (NYSE: JNJ) is the largest and most broadly based health-care company in the world and engages in the research and development, manufacture and sale of products in the health-care field. JNJ owns Remicade (infliximab), a blockbuster several times over with approved use across a range of inflammatory diseases. The founders of 180 Life Sciences discovered the anti-TNF drug class that led to the development of Remicade and to a $4.9 billion merger between Centocor Biotech and JNJ.

AbbVie Inc. (NYSE: ABBV) is a research-based biopharmaceutical company engaged in the development and sale of pharmaceutical products. With a focus on treating conditions such as chronic autoimmune diseases, AbbVie owns Humira, an anti-TNF therapeutic and the top-selling drug in the world. AbbVie’s Humira (adalimumab) reached almost $20 billion in sales in 2018 and demonstrates the potential of anti-inflammatory drugs to make mega-bucks.

Amgen Inc. (NASDAQ: AMGN) is one of the world’s leading biotechnology companies. The company focuses on areas of high unmet medical need and leverages its expertise to strive for solutions that improve health outcomes and dramatically improve people’s lives. Amgen has been at the forefront of innovator biologic medicines for inflammation for more than 20 years and now has a pipeline rich in biosimilars that treat inflammation. Amgen paid $13.4 billion in cash for Celgene’s blockbuster anti-inflammatory drug, Otezla, which treats psoriasis and psoriatic arthritis by regulating cellular inflammation.

Anti-inflammatory drugs created by the scientists now at 180 Life Sciences have changed the lives of millions and generated billions in sales revenue. All indications point to the scientists at 180 Life Sciences being able to repeat past successes, with the possibility of delivering the next generation of blockbuster anti-inflammatory therapeutics.

NetworkNewsWire (“NNW”) is a financial news and content distribution company, one of 50+ brands within the InvestorBrandNetwork (“IBN”), that provides: (1) access to a network of wire solutions via InvestorWire to reach all target markets, industries and demographics in the most effective manner possible; (2) article and editorial syndication to 5,000+ news outlets; (3) enhanced press release solutions to ensure maximum impact; (4) social media distribution via IBN millions of social media followers; and (5) a full array of corporate communications solutions. As a multifaceted organization with an extensive team of contributing journalists and writers, NNW is uniquely positioned to best serve private and public companies that desire to reach a wide audience comprising investors, consumers, journalists and the general public. By cutting through the overload of information in today’s market, NNW brings its clients unparalleled visibility, recognition and brand awareness. NNW is where news, content and information converge.