NetworkNewsWire Editorial Coverage: Despite short-term gyrations, the outlook for lithium continues to shine. Electric mobility is still only in its infancy. Revolutionizing how we commute and power our lives, the inevitable tsunami of electric vehicles and burgeoning demand for energy grid storage are driving lithium demand for the foreseeable future.

Anticipation of an exponential increase of electric vehicles coupled with expanding demand for lithium-ion (L-ion) batteries drove the lithium mining sector to reach all-time highs last year. Lithium shares swooned at the beginning of 2018 on a negative oversupply forecast by Morgan Stanley analysts. That forecast has since been widely debunked by a broad range of lithium industry experts and given only a 1 percent chance of happening. As the world inexorably advances into the new electric power paradigm, the lithium sector should experience an excellent decade and produce outsized returns. Demand for raw battery materials continues to grow at an unprecedented pace, and lithium miners could easily rack up further gains and reach new highs. With large upside potential, evermore attention is turning to junior miners such as QMC Quantum Minerals Corp. (OTC: QMCQF) (TSX.V: QMC) (FSE: 3LQ) (QMCQF Profile).The company is intent on building shareholder value through the acquisition, exploration and development of natural resource properties that contain either high-quality lithium or silver, gold, nickel, copper and zinc opportunities. Historically validated, QMC’s 100 percent-owned flagship project, the Irgon Mine Project,holds a potential motherlode of lithium. In addition, major lithium producers such as Albemarle Corporation (NYSE: ALB) and Sociedad Quimica y Minera S.A. (NYSE: SQM) plan production increases, and Nemaska Lithium, Inc. (OTC: NMKEF) (TSX: NMX) is also in the hunt to supply companies such as Tesla, Inc. (NASDAQ: TSLA) and myriad other end users seeking a secure supply chain. 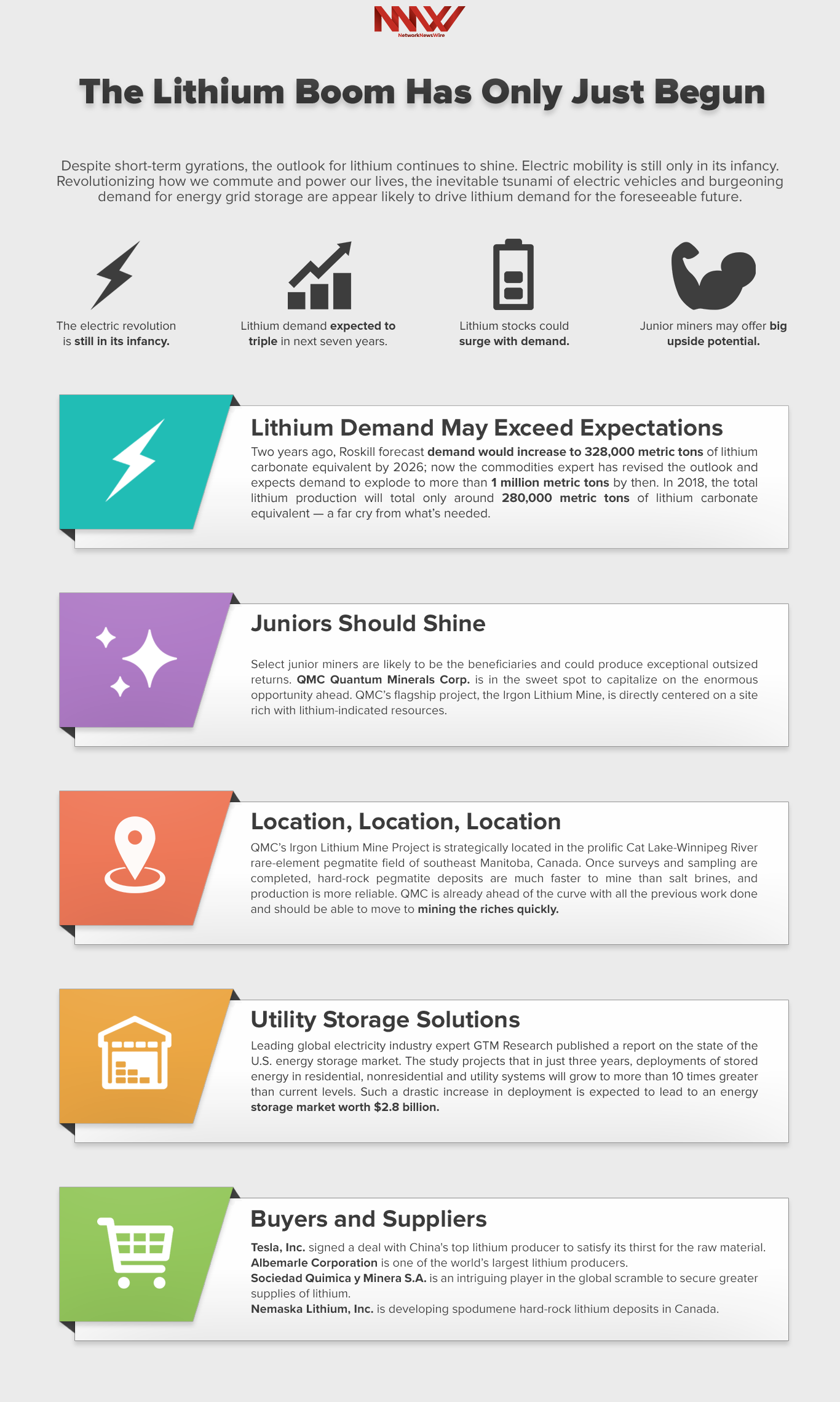 Reflecting the scale of the impending energy revolution, respected independent commodity forecaster Roskill tripled its demand forecast for lithium through 2026. Two years ago, Roskill forecast demand would increase to 328,000 metric tons of lithium carbonate equivalent by 2026; now the commodities expert has revised the outlook and expects demand to explode to more than 1 million metric tons by then. However, lithium supply expectations fall far short of forecasts. In 2018, the total lithium production will total only around 280,000 metric tons of lithium carbonate equivalent — a far cry from what’s needed.

A wild card in the quest for lithium feedstocks is China, which already controls 55 percent of global lithium-ion battery production. China plans to deliver about 3.5 times more gigawatt-hours of battery cells a year than the Tesla Gigafactory and is expected to command 65 percent of all production by 2021. China also has been pushing hard for clean energy and intends to flood highways with 5 million electric vehicles by 2020. As electric autos and energy storage solutions surge, indications are that lithium may soon become the most important energy commodity in the world.

Many believe that the majors just won’t be able to produce enough lithium to meet global demand. Select junior miners are likely to be the beneficiaries and could produce exceptional returns. QMC Quantum Minerals Corp. (OTC: QMCQF) (TSX.V: QMC) (FSE: 3LQ) is in the sweet spot to capitalize on the enormous opportunity ahead. Documented by the previous owner, QMC’s flagship project, the Irgon Lithium Mine, is directly centered on a site rich with lithium-indicated resources. In the 1950s, the Lithium Corporation of Canada Ltd. drilled 25 holes into the Irgon Dike and reported a historical resource estimate of 1.2 million tons grading 1.51 percent Li2O over a strike length of 365 meters and to a depth of 213 meters. The mine was closed in the late 1950s due to a lack of demand for lithium at the time; things certainly have changed since then. QMC is currently updating the historical resource data to meet current NI43-101 reporting standards through a detailed channel sampling and subsequent drill program. An interactive 3-D model displaying historical data derived from past drilling and underground work shows that exploration and underground development has taken place only on the central portion of the dike, which means there’s a significant opportunity to quickly increase tonnage along strike. QMC recently issued an update on its promising drill program.

Once these assets are confirmed to current standards, it’s likely they will have a dramatic impact on QMC’s balance sheet. The results so far have been exceptionally promising since they currently reflect historic assays. Channel sampling on the Irgon Dike has returned 1.73 percent Li2O over 14 meters. In addition,regional results obtained from sampling of other dikes in the area returned three chip samples with concentrations over 1.90 percent lithium-oxide, including one that assayed 2.62 percent. These positive results, in conjunction with the well-developed mining infrastructure already in place, may position QMC to quickly leverage the assets and capitalize on the global demand for lithium.

QMC’s Irgon Lithium Mine Project is strategically located in the prolific Cat Lake-Winnipeg River rare-element pegmatite field of southeastern Manitoba, Canada. This area is rich in spodumene-bearing pegmatite occurrences, also known as the source for hard-rock lithium mineralization, that often contain large amounts of lithium and other rare-element-bearing minerals. Once surveys and sampling have been completed, hard-rock pegmatite deposits are much faster to mine than salt brines, and production is more reliable. QMC is already ahead of the curve with all the previous work done and should be able to move forward to mining the riches quickly. The region’s abundant mineral resources are further substantiated by the mining activities of neighboring specialty materials behemoth Cabot Corp. through its Tantalum Mining Corporation of Canada (TANCO) rare-element pegmatite deposit.

QMC Quantum Minerals has already invested two years in the exploration of its Irgon Lithium Project. Normally it takes three to five years to develop, but due to the extensive previous exploration and development work done on the site decades ago, QMC expects to start operations much sooner than anyone thought possible and is rapidly moving toward bringing the property online for production. QMC has expanded its Irgon Lithium Mine Project holdingsby 650 percent, raising the project’s contiguous footprint to 11,325 acres as it aggressively moves the Irgon Mine Project forward to production.

Like the Irgon Lithium Mine Project, QMC’s 100 percent-owned Namew Lake District Property is also exceptionally well located. The 23,000-hectare property encompasses the Rocky Lake Discovery in the Flin Flon Belt, a world-class mining district in Northwestern Manitoba. QMC’s geophysical and drill programs at the Rocky Lake Project identified significant geophysical conductors, and assays from the drill holes showed evidence of gold, copper and zinc mineralization. This project represents a massive resource with strong future potential, but with lithium in such demand, QMC is focused on bringing the Irgon Property into production first.

Leading global electricity industry expert GTM Research published a report on the state of the U.S. energy storage market. The study projects that in just three years, deployments of stored energy in residential, nonresidential and utility systems will grow to more than 10 times greater than current levels. Such a drastic increase in deployment is expected to lead to an energy storage market worth $2.8 billion.

If there are any doubts about lithium demand, look at any lithium mining company — every single one is trying to rapidly expand production. The lithium boom has just begun, and it won’t end any time soon. Strategically positioned portfolios in the lithium sector should excel well into the future.

To lock in lithium supplies, Tesla, Inc. (NASDAQ: TSLA) just signed a deal with China’s top lithium producer to satisfy its thirst for the raw material. Tesla uses the metal as a key component to manufacture batteries for its electric cars and other energy storage products. The company is rapidly expanding output of its Model S and building a lithium-ion battery factory in Nevada.

Albemarle Corporation (NYSE: ALB) is among the world’s largest lithium producers and a leader in specialty chemicals. Albemarle’s lithium business segment mines lithium and converts it into different forms along the value chain. The company operates one of the only operating lithium brines in North America as well as a brine in Chile. ALB plans to expand production in 2019 under an Australian joint venture.

Chile-based Sociedad Quimica y Minera S.A. (NYSE: SQM) is an intriguing player in the global scramble to secure greater supplies of lithium. SQM announced plans to expand lithium carbonate capacity to 63,000 metric tons by year end. The Chilean government blocked China’s aggressive bid for over 30 percent ownership of SQM last year but reached an agreement in May allowing China’s Tianqi Lithium to buy a 24 percent stake, which could grant China control of about 60 percent of the world’s lithium supply.